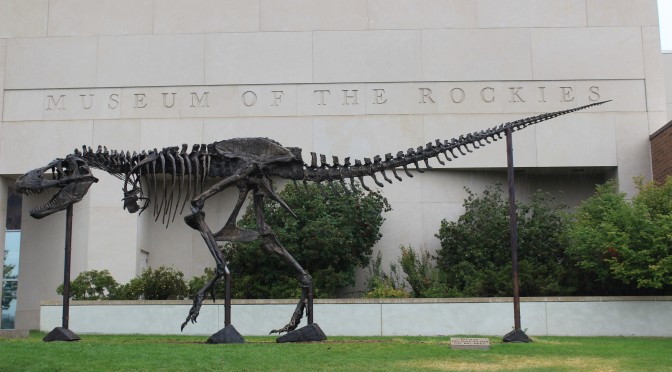 Returning to the Museum of the Rockies as a college student.

Growing up in less than a block from the Museum of the Rockies (MoR), I was somewhat of a fixture at this world-class institution. I never got sick of looking at the seemingly endless collection of fossils and artifacts, not to mention the triceratops sculpture that roared when it sensed movement. (Whatever happened to that thing, anyway? It would provide the perfect homey touch to my rundown rental house.) Then I entered middle school, and immediately became too cool to learn about the rich and dynamic history of my state. I was more interested in re-watching The Lizzie McGuire Movie for the umpteenth time than learning about the newest paleontological discovery by Jack Horner. (Fun fact: Jack Horner was the scientific adviser for all three Jurassic Park films.)

Recently some free tickets landed in my lap, and I decided it was time to return to MoR after my extended hiatus. To bring things full-circle, I brought my mom. As soon as we parked, I threw open the car door and skipped to the front doors. Yes, it was as if I was a kid again, with my mom following close behind.

Giving the clerk our tickets, I pondered the best placement for my admission sticker, then promptly  peeled off the back and slapped it on my forehead.  My mom rolled her eyes. “Are you going to wear that the whole time? Maybe we should get you a stroller so I can keep track of you, too,” she teased.

Fossils in the Hall of Teeth and Hornes

Wandering into the featured exhibit, “Geckos—Tails to Toepads,”  I immediately found myself captivated, stopping at every display. I read each gecko’s informational blurb in its entirety, and viewed each species from all angles of their glass enclosure. (Fun fact: Many geckos have “disposable” tails that can be released in an attack.  The broken tail wriggles to distract the predator and muscles around the wound quickly seal torn blood vessels while the lizard escapes.)

Meandering from one gecko species to the next, my mom and I  conversed about evolution and whether or not Charles Darwin had written anything on geckos.  We even tried in vain to explain to one another the complex science of how geckos obtained their colors and camouflage.

It wasn’t all adult talk and pretentious references to On the Origin of Species, however.  At one point I squealed, “Mom! Look!  This one has polka dots!” (Spotted animals are cool at any age.)   It was nearly impossible not to feed off the enthusiasm of the awe-inspired children, who were as psyched about a Native American “metate” (essentially a big rock used for grinding grain and seeds) as they were about the hyperactive gecko making gravity-defying leaps from branch to branch.

Whether time really does make the heart grow fonder, or my mind had been opened by additional schooling,  I found myself appreciating the  lizards for more than just their pretty colors and their acrobatic ability to hang upside-down on branches. I could now acknowledge the properties and natural processes that create such a unique organism. Chemistry, physics, and evolution—to name a few—all had a part in the gecko’s creation. Wow, Mother Nature is truly impressive.

Some of the many types of gecko scales

Overall, my little jaunt to the Museum of the Rockies was not only a great way to spend an afternoon, it made me realize how I’d taken the place for granted.  How many people can walk across the street and find themselves face-to-face with a fossilized dinosaur rib taller than the average person?  Yep, we’re pretty damn lucky to have MoR in Bozeman, and this time, I won’t forget it.

Leg and rib bones of a Sarapod (Brontosaurus)

“Tails to Toepads” is one of the Museum’s rotating exhibits, and will only be on display until September 7, 2014.  The museum also includes permanent exhibits on dinosaurs, regional and American Indian history, a children’s discovery center about Yellowstone, a living history farm, and the Taylor Planetarium, which features one of the world’s most advanced projection technologies. For more information visit museumoftherockies.org.