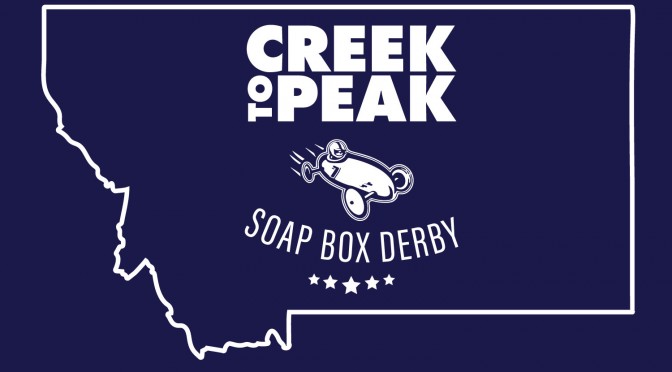 A new brand of mountain racing in southwest Montana

Engineering students with an adrenaline addiction, your time has come. The 2nd Annual Creek to Peak Soap Box Derby, a competition in which teams build their own soapbox cars and shoot them down a steep hill riddled with obstacles, is just around the corner.

Creek to Peak, an outerwear company from Bozeman, started the derby last year after some beer-induced brainstorming by founder Frank Gazella Jr. in an effort to not only promote their brand, but to create a truly Montana competition. “Ultimately, we wanted an excuse to have some fun,” says Frank, “and after doing it once, I can tell you it’s an adrenaline rush. This is the only event in the country that does this. It’s super unique and it’s a great team-building event. It’s not just a competition but it’s also kind of a party in the outdoors.”

“The race itself was an absolute blast,” says Shayne Forsythe, driver for last year’s winning team, the Cake Eaters. “Each cart was totally different so it was a lot of fun to talk about everyone’s design choices.”

Shayne graduated from MSU with a BS and an MS in civil engineering, and that is what really piqued his interest in the derby— and ultimately won his team the race. “This is exactly the type of fun engineering students (and others, of course) can have when given the right motivation. Our build process started with some very lofty ideas that slowly morphed into a more achievable design that we put to the test the day of the race, and we had a ton of fun doing it.”

Creek to Peak hopes to eventually turn the derby in to a team-building event for students, and is currently looking for more support on campus. “There are loads of incentives to enter the race, especially for college kids,” says Frank.  “You’ll get the most comfy t-shirt you’ll ever wear, a stainless steal bottle opener, and 500 bucks for the first-place team. Not only this, but once you have a car built, you can enter any race as the years go by, building a legacy in the Soapbox Derby community.”

Frank is hoping to get 15 to 20 teams in the race this year. The more people who enter, the more prize money Creek to Peak can give away. They are also partnering with local outdoor-oriented companies such as Outside Bozeman  that will be donating other gifts and prizes for racers.

The basic rules are this: you need to be at least 14 years old, have a maximum of five people per team, and two people per car on race-day. The registration deadline is March 1, so hop to it.

“That’s pretty much it,” says Frank.  “Get out of the rut of doing the same thing, do something different, come enjoy some scenery and be able to say ‘yeah, one time I bombed down a hill in a tiny little car I made myself.’”

Full rules and regulations for the Derby can be found on the Creek to Peak website. Follow them on Facebook and Instagram to keep up on the countdown to race day, and have some fun at this daredevil-meets-engineering-nerd contest.