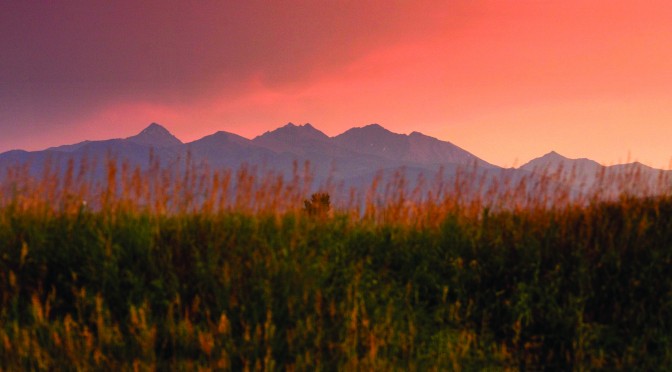 Mountains surround Bozeman. Look north, and you see the Bridgers; south and it’s the Gallatin Range; west, the Madisons and Tobacco Roots. With all that elevation, we wouldn’t fault you for getting a few peaks confused. But there are some that rise above the rest, and you should know them. Here are four.

Ross Peak
Look north toward the Bridgers from anywhere on the west side of town, and you’ll immediately be drawn to the bare rock jutting skyward from the range’s midsection. That’s Ross Peak, and while it isn’t the highest in the Bridgers, it is the most iconic. The naked rock begs to be climbed and can be summited without much technical effort. Get there from the Ross Pass trailhead on the east side of the range after bumping your way along a severely rutted-out Forest Service road.

Mount Blackmore
When your gaze drifts south, it will inevitably be arrested by the crown of Hyalite, Mount Blackmore. Resting squarely in the middle of the southern horizon, Blackmore holds the last light of the day, transitioning to a purple hue as the sun sets. Read about how it was named in the Summer 2017 issue of Outside Bozeman, then hike to the summit from the trailhead bearing its name, which begins up Hyalite Canyon just below the reservoir.

Gallatin Peak
Believe it or not, Gallatin Peak is not in the Gallatin Range, which is confusing. But it is an impressive peak indeed, standing tall in the southwestern skyline. As the ranking member of the Spanish Peaks, Gallatin sees a lot of traffic come summer, and even a few ski descents in the spring. Viewed from town, it’s the large triangular peak on the far-left side of the Spanish Peaks, which appear to loom above the mouth of Gallatin Canyon. There are several approaches for those hoping to climb the peak, including Spanish Creek, Indian Ridge, and Beehive Basin.

Hollowtop
While most iconic peaks are defined by, well, peaks, the Tobacco Roots’ resident superstar is hollow, as its name suggests. In fact, Hollowtop looks scooped out, like some mountaintop-removal coal mine in Appalachia. That’s because another peak, Jefferson, makes up the opposite side of this high-alpine bowl. Driving west on Norris Rd. to fish the Madison, you can’t mistake the twin peaks, and both can be climbed in a single day from the North Willow Creek trailhead.