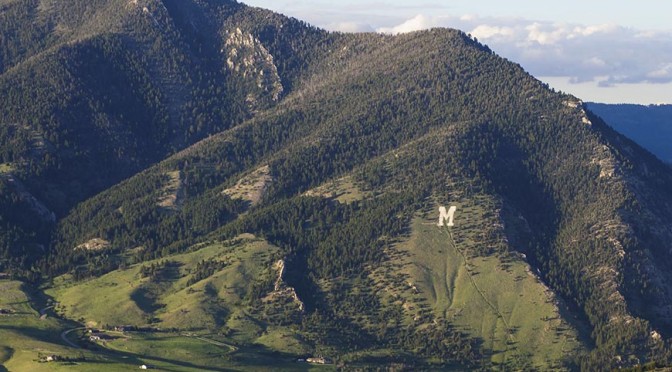 On any sunny day in Bozeman, the trailhead of the M will be packed with dozens of parked cars flooding onto Bridger Canyon Rd.—all holding families and students excited to hike the most iconic trail in town. While thousands have plodded to its mountainside perch at 7,000 feet,  few know the history of this colossal consonant and the enterprising class of students that created it over a century ago.

The sun shines on the M

In the fall of 1915, MSU sophomores pledged to create a monument to the university. Drawing up a proposal and securing a U.S. Forest Service permit, 60 young men trudged up the southern end of the Bridgers and began the project. In one day, they carefully drew outlines for the 240’ x 160’ letter, pried rocks from the hillside, and carried them by hand to fill in the site. They returned to whitewash their masterpiece when the snow cleared the following spring.

From then on, whitewashing the M became a ritual for MSU freshmen. An honorary society of seven senior men, called the Septemviri, was established in 1920 to safeguard campus traditions. Alongside the sophomore unit called the Fangs, the two societies didn’t allow freshmen to date until the M had received its annual coat of lime.

Students whitewash the M in 1939

A women’s counterpart to the Fangs emerged, the SPURS, and eventually the two groups merged. (In 2006, they changed names once more to the more descriptive and humdrum “Student Alumni Association.”) Over time, the Fangs and the SPURS, alongside various athletic groups, gradually accepted responsibility for the upkeep of the M, returning annually to re-lime the letter and collect trash along its approach trails.

Still, by the late ’90s, the M needed more than another coat of paint. Led by the late Torleif Aasheim (former director of Montana Cooperative Extension Service and class of 1937), university employees, alumni, and community members organized a major restoration of the landmark. They raised $100,000, promptly redesigning and paving the trail’s parking lot, replacing fallen rock, and repairing and improving the trails.

A drone’s eye view of the M

Recently, a new tradition launched at the refurbished M. Every year, before the first football game of the season, the Student Alumni Association now lights candles outlining the M, letting the symbol glow into the night. You can be part of the grand tradition of the M by being one of 100 students to put a fresh coat of paint in 2018, at “Rocking the M.”

The candle ceremony honors a caption from the 1918 MSU yearbook: “May the ‘M’ stand long as a symbol of our loyalty to Montana State and a reminder of what a united class can accomplish.” 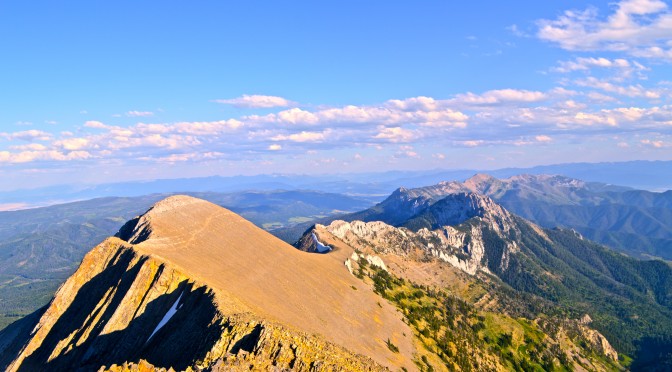 It’s been two weeks since I had surgery on my ankle following a rock climbing accident. I’m sitting on the couch with my left foot elevated with a couple pillows, thinking about my removal from the outdoors, a place that has—since moving to Bozeman a few years ago—become, much like coffee, an integral part of my daily routine.

With months before I’ll be back out running up Hyalite or ascending routes at Natural Bridge, I’ve spent a good amount of time recounting outdoor exploits, such as my first time running Baldy Mountain

It was a Sunday morning when I stepped out of my apartment, stretching my quads before setting off on a run. That’s when Baldy caught my eye. I had never run it, but I was looking to run ten miles—nearly the same distance as the round trip from top to bottom. So naturally I grabbed a small running bottle, hopped in the truck, and headed towards the mountains.

Trail running in the Bridger Mountains

Upon arrival at the trailhead, I read the temperature gauge before taking off: 87 degrees. It was going to be a hot one, but I didn’t think much of it. By the time I reached the painted rocks of the M I was sweating as the sun beat down on me, but I was more focused on the view and working to eat up more trail under my shoes.

The view from the trail.

Just over halfway to the summit, after passing only one other runner, I was nearly out of water. I began to feel my muscles tightening and my throat drying in the rising temperature. It was now nearly mid-day.

Soon, my thirst had overcome my self-control, and I had gone through what little  water I had left. I figured I wouldn’t need much water on the way down anyway. At the summit, I thought little of the headache from the dehydration, and instead focused my eyes on the green hills surrounding Bozeman, looking down on the city I had come to call home.

I took a few minutes to look through the letters to old and gone friends, the geocache, and small trinkets at the top of the peak in the blue ammo box. One last look at the view, and I set off back down the trail.

Just off of the summit I passed the same runner from the way up. We exchanged cordial waves, and both lamented our lack of water for such a hot day in the wind and sun before we continued in our respective directions. I was starting to hurt from the lack of water, and thinking of little else.

By the time I passed the M, I had stopped sweating—a sign that I was getting dangerously close to suffering a heatstroke. At this point, the only thing keeping me from stopping and taking a seat was knowing how close the truck was.

After what felt more like thirty miles than ten, I reached the parking lot. At the truck, I dropped the tailgate, desperately reaching for the emergency water jug I keep in the bed. I filled my small bottle—once, twice, then three times—sucking down tepid water. Somewhere around my fifth bottle, I began coming back to life, and just as I did, the runner I passed earlier walked slowly away from the trailhead.

I jumped up, mustering more energy than I thought I had remaining, and snatched his bottle out of his hand. Soon as I handed it back to him, he downed it as quickly as I had. We repeated the process a few more times before any words were exchanged. Soon, we were sitting on the tailgate, laughing and sipping warm water from our small running bottles.

We laughed about our lack of liquid, how the heat took us by surprise, and how many times we had run Baldy—both admitting it was our first. Once we both felt sufficiently hydrated to drive back into town, I put away the water, shut the tailgate, and we went our separate ways.

Since moving here for school, it seems as though some part of every day is spent outside—running, climbing, skiing, hiking, or biking. Normally, I don’t think much on it, it’s just something I do, an integral part of each day. Lately, sitting on the couch with a broken ankle has forced me to reflect. I’ve realized it isn’t just about me and my goals, or something that I do day after day, but instead it’s about the people who share the same experiences, and taking the time to laugh at yourself and push your limits, although preferably with more water. 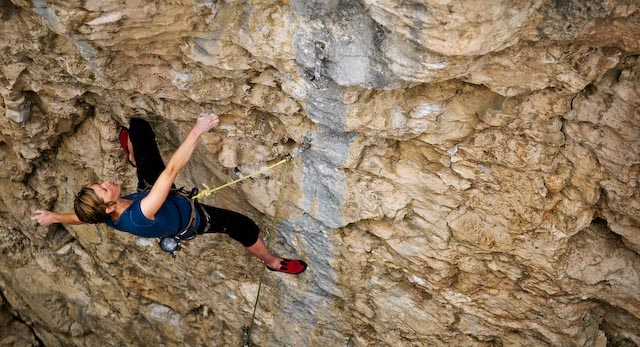 College students are known for being impulsive and thrifty, but sometimes—when rock climbing, for example—it pays to slow down and invest in your safety. Here are three simple things to think about: properly threading top anchors, doubling back your harness, and replacing old, worn-out gear. And, of course, don’t forget to wear a helmet.

Threading Top Anchors
Most climbing accidents occur at the top of a climb or during the descent. At the top of most sport-climbing routes in southwest Montana, you will find double-chain anchors (always consult a guidebook for specific anchor information). Once you’ve reached the anchors, clip in with a 24-inch sling girth-hitched to your belay loop, or two quick-draws for redundancy. Make sure that you clip into one of the bolt hangers or a chain-link other than the bottom ones, which you need to reserve for re-threading the rope.

After you’re securely clipped into and weighting the anchor, call for slack and take up about four or five feet of rope. Tie an overhand or figure-eight knot in the rope and clip this to your belay loop. This important step prevents you from accidentally dropping the rope after you untie your lead knot. (Dangling from the rock 50 feet up with no way down makes for an embarrassing call to Search & Rescue.)

Now you can untie your original lead knot and thread the rope end through the last two links of the anchor chains. Next, simply tie back into the end of the rope with the same knot you used for leading. Unclip and untie the knot securing the rope, and call to your belayer to take up the slack. Once you feel tension on the rope from your belayer, unclip the quick-draws and call to be lowered.

Doubling Back
Many climbing accidents occur because climbers fail to double-back through their harness buckles properly. Most buckles require the user to thread the waistbelt webbing completely through the buckle once and then back through again to lock the system. Always check your harness buckle—make it part of your tie-in routine. After tying in to the sharp end of the rope, take a second to assess the knot and confirm that your harness is doubled back. When belaying, always ask your partner if she is doubled back as part of your verbal routine.

When it’s time to replace your old harness, consider upgrading to a rig that utilizes a two-piece speed-locking buckle, which does not require the user to double back.

Replacing Old Gear
Though well-used gear may feel as comfortable as broken-in blue jeans, retiring hammered or old gear boils down to safety. There are two simple guidelines to follow. First, replace any piece of equipment that shows visible signs of damage: a crack in a helmet, frayed rope sheath, a grooved belay device. But most climbing gear will eventually need to be replaced even without explicit signs of wear. Which brings us to the second guideline: if you have any doubts about a piece of equipment, retire it.

Although buying new climbing gear stings the wallet, the cost is nothing compared to a visit to the emergency room.

This article first appeared in Outside Bozeman in the Summer of 2016. Chris Naumann is a lifelong climber and former owner of Barrel Mountaineering.